ISNA Panel: A Voice of Hope in the Time of Turmoil 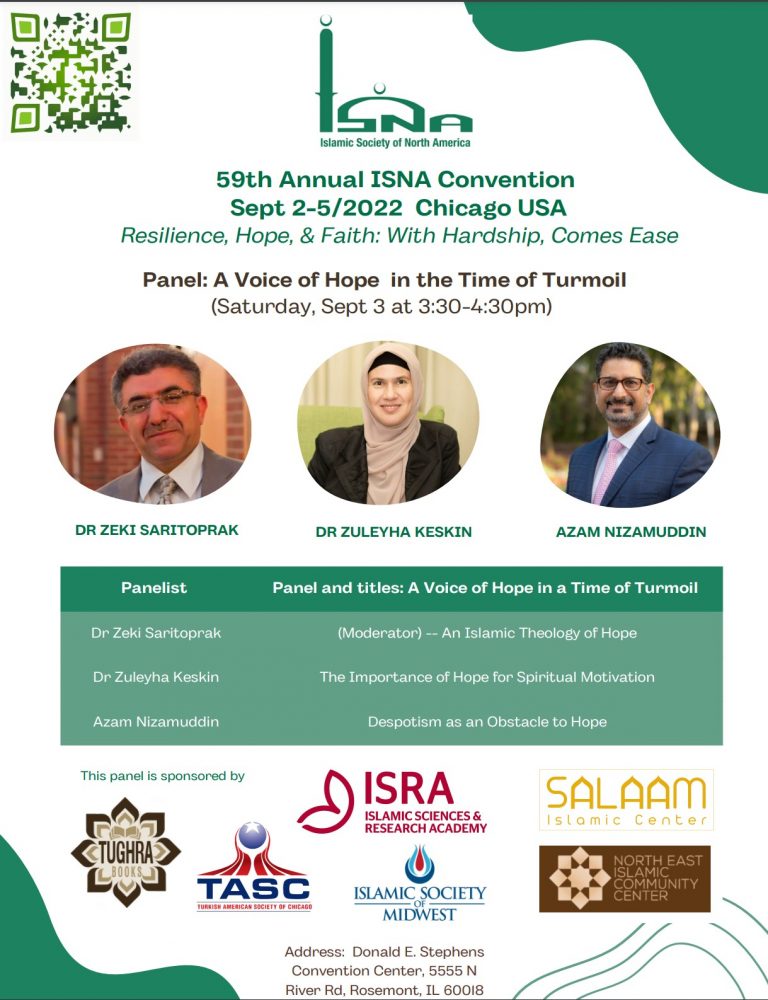 This panel will discuss the idea of hope in Islam. Specifically, it will focus on lessons that can be gained from Said Nursi’s Damascus Sermon. Given in 1911 in the Umayyad Mosque to a large crowd, including many ulema. In his sermon, Nursi describes hopelessness as one of the diseases of the Islamic world. While the environment of the late Ottoman Empire may seem very distinct from contemporary America, the similarities are greater than one would expect.

This panel will include three panelists. The expected panelists and the titles of their talks are:

Dr. Zeki Saritoprak is the Bediuzzaman Said Nursi Chair in Islamic Studies and a Professor in the Department of Theology and Religious Studies at John Carroll University in Cleveland, Ohio. He holds a Ph.D. in Islamic Theology from the University of Marmara in Turkey. His most recent books are Islam’s Jesus, published by the University Press of Florida in 2014, and Islamic Spirituality: Theology and Practice for the Modern World, published by Bloomsbury in 2017. He is currently working on a book on Islamic Eschatology.

Dr Zuleyha Keskin — The Importance of Hope for Spiritual Motivation

Dr. Zuleyha Keskin is the Course Director at the Centre for Islamic Studies and Civilisation, Charles Sturt University, Australia. She is also a lecturer in Islamic spirituality. Zuleyha is the co-founder of ISRA Academy, the Managing Editor of the Australian Journal of Islamic Studies, and President of Australian Association of Islamic and Muslim Studies. Zuleyha completed her Master of Arts in Islamic Studies at the University of Sydney, writing her thesis on “Interfaith Dialogue from an Islamic Perspective.” She completed her Ph.D. at the Australian Catholic University, which she recently published as a book. The book is titled “Attaining Inner Peace in Islam: Said Nursi’s Perspective.”

Azam Nizamuddin — Despotism as an Obstacle to Hope

Azam Nizamuddin is an attorney, scholar, and activist. Professionally, Br. Azam is General Counsel for NAIT, and Chief Compliance Officer for Allied Asset Advisors, which operates the Iman Fund, a sharia-compliant mutual fund. Previously, he worked as a litigator for large and small law firms in the areas of business litigation, employment, and family law. He regularly gives presentations on Religion and Constitutional Law, not-for-profit law, and Family Law. He serves in many leadership roles in the DuPage County Bar Association and is a founding member and former President of the Muslim Bar Association. Mr. Nizamuddin has been teaching and lecturing about Islam for the past 25 years at colleges & universities, most recently as Adjunct Professor at Loyola University of Chicago. He also has been an interfaith leader for the past 25 years. In 2020, he ran for Circuit Court Judge in DuPage County, where he became the first Muslim to win a primary election in a County Wide race. He almost won the General Election by earning 229,760 votes in DuPage County. Currently, he is a candidate for State Representative in Illinois for the 48th District.